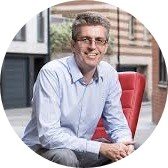 Dr Ian McDonald has been a leader and visionary in technology for over 20 years working in a range of multinational companies such as BHP, DHL, Sitel, Ecolab, Symbian and News UK. Ian has extensive experience ranging from national/global responsibility for IT to leading software development teams.
Ian is now global lead for tech engagement at Microsoft for Startups, after becoming part of Microsoft through the SwiftKey acquisition where he was IT Director. Ian’s teams have built thousands of servers in the cloud, and built services working with billions of data points per day. He has also been involved with a range of startups in advisory roles. Ian has a first class honours degree in Computing and Maths and a PhD in computer science. He also has been a contributor to the Linux kernel, other open source projects and been an IETF working group member. Ian is passionate about diversity and inclusion, and is on the autistic spectrum himself.